Sketchbooks Through the Ages 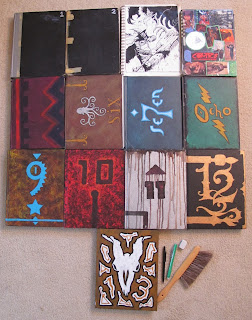 A colorful array of all 13 of my sketchbooks from past to present.
I can't decide which is better: the duct tape binding fix on sketchbook 1 or the masking tape fix on #2.

Obviously I have been drawing a long, long time. But I didn’t start keeping a true sketchbook until I got one as a freshman in college as part of my initial freshman year package of art supply crap. That was Fall of 1991.  Even then, it took me a bit to warm up to the idea of having a book of blank collected pages to scribble, doodle, and draw on when the whim presented itself. In retrospect, I was doing sketchbook stuff for years before college - in the form of drawing all over my pages of notes in high school.  Algebra, Pre-Calc, Social Studies, History, Physics - all those notes were festooned with little drawings and doodles - in some cases there were more drawings on a note page than notes. Funny thing is, my sketchbooks in college represented the same thing - a place for drawings AND class notes.  Though the favor had been tipped irreversibly in favor of drawings - notes pushed to the margin. Literally. 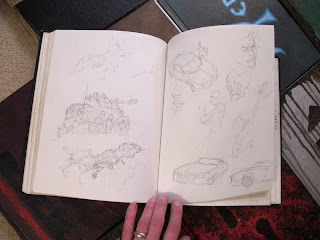 So my sketchbook collection (pictured at the top) began in 1991. These are my SKETCHBOOK sketchbooks.  That is to say, I have eight other sketchbooks, larger ones of the same black, hardcover variety but I use them mainly as places for fully realized line drawings that get scanned and go on to become paintings or other finalized illustrations.  They do not include all the really fun mindless doodles, free-drawing, and idea-forging that these here have. Thus, I don’t count them as true sketchbooks. Why do I make this distinction, I have no idea. But I do. 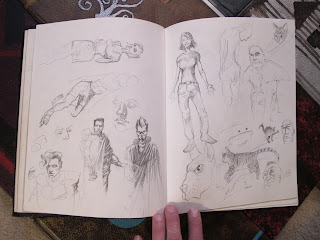 On all but two I noted the date I started each sketchbook. I started my latest one on January 2nd of this year - number 13! That’s 12 going on 13 in 22+ years - I guess that makes my average about one sketchbook per 21 months or so. Some artists burn through sketchbooks like crazy - I go through spurts where barely anything gets added for months and then 1/3 of a book gets filled in the span of 3 weeks because I’m working on some large-scoped project or something and I churn out pages of sloppy thumbnails and loose gesture drawings to work out some action pose or what-have-you. That doesn't mean I go a long time without drawing - it most likely means I am applying my drawing and/or creativity elsewhere. 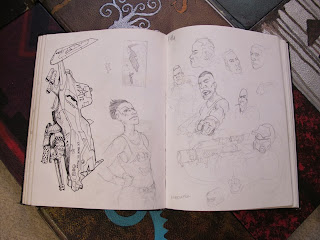 A spread from sketchbook 5 - thumbnails for a
World of Darkness:Hunter book on the right.
Circa 1998

I’ve been referring back through these sketches a lot in the last few years. First when I was collecting content for my book AGGREGATE.  I went over each sketchbook trying to find the most fun drawings out of hundreds and hundreds of pages.  Most recently I have been having to go back through the last four or five rather frequently to seek out random sketches for Magic: The Gathering card art.  Yes, some of the paintings I have done came from relatively small drawings in one of these smaller sketchbooks - essentially up-sized thumbnails that I figured were refined enough to go straight to the paints with. But people inquire about them and are often interested in buying them so I have to go track them down and discern whether they are worth selling. 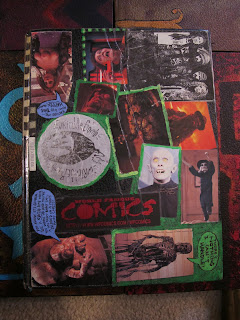 My obnoxiously geeky sketchbook cover for #4
Looks like a teenager's bedroom door. Except I was 23.

You can see that it didn’t occur to me to decorate the exterior of my sketchbook until book 4.  Book 3 looks like it has a pen-and ink drawing for a cover but actually it is just the first page - the cover did not last very long and thus, that was the first and last time I bought a spiral-bound sketchbook. But since then, it has become part of the ritual for starting a new sketchbook.  I don’t put much time or thought into decorating the cover though - I usually just grab whatever acrylic paint I happen to have an excess amount of and just wing it.  Obviously my favorite is Book4 though. That one I started the Summer before my last semester in college - 1995. It shows the most personailty and show a slice of  that era of my life: a collage of random pop culture magazine pics (White Zombie, Salem’s Lot, Total Recall, Predator2) and a sticker from my friends’ band Wrinklebomb - all lovingly laminated in packaging tape.  Actually, the packaging tape is a good idea - that book’s cover is still holding together nicely! 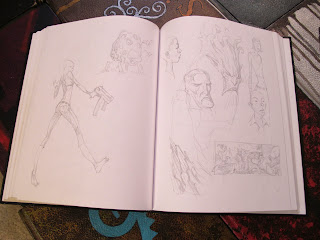 Some doodlin' from sketchbook 8 (circa 2005) with a tiny little thumbnail for my
Dragons of Eberron book cover on the lower right. 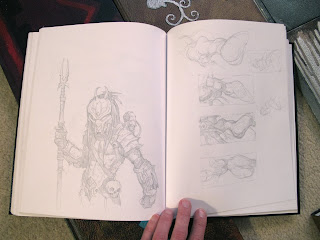 There seems to be at least one Predator in every sketchbook. This one
is in sketchbook 10 (circa 2009-2010) along with some thumbnails for some random painting.

My favorite aspect of this little collection of my sketchbooks is how they chronicle (through no foresight or planning of my own) definitive moments in my career and life - noteworthy evidence of certain projects, ideas, and certain times.

There are lots of traces of notable college projects in the first 4 sketchbooks, sketches of my parents’s cats, even a random drawing of one of my coworkers when I worked a couple summer months at a movie theater (1993 - the summer Jurassic Park came out!). There are countless inside jokes that I shared amongst my college pals not to mention copious movie-reference sketchs from Aliens to Predator to Tombstone, Star Wars, Geronimo, and Conan (we geeked on movie stuff all but constantly). 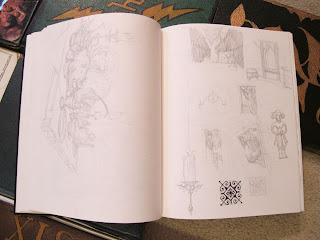 A spread from sketchbook 11 (circa 2011) that shows a rough of "Yule Ooze" on the left
and some thumbnails for Innistrad cards on the right.

During my third sketchbook (sometime in late 1994), my professional illustration career started off with a handful of pages of pen and ink drawings I did specifically as portfolio pieces to show to White Wolf. That sketchbook ends with thumbnails and roughs for my very first job with them for a book called World of Darkness: Outcasts. It also randomly includes a travel journal from when my friends and I went camping in Appalachia for Spring Break.

At some point in my 6th sketchbook was when I started doing work for Wizards of the Coast (2002). At least 2/3 of that sketchbook contains all the concept drawings I did when I worked on creating the world of Eberron (early 2003). It also has a couple pen and ink illustrations I did for centerpieces that my wife and I made for our wedding.

Sketchbook 7 has loads of drawings and roughs for D&D miniatures and sketchbook 8 is when I started working on Magic: the Gathering (2005-2006). Sketchbook 9 marks the time when I started this blog. And, well, you get the idea. 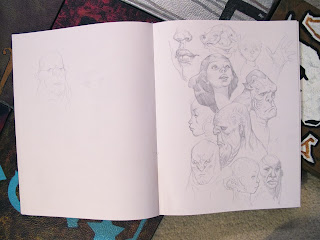 In no other way can you look at an illustrator's career and development as intimately as you can when you peruse that artists's sketchbooks. It's like a (insert cliche deep thought metaphor here) - and that's a fact. Here's hoping all you artists out there don't take these little collections of your artistic growth for granted. Save them and keep 'em around - sprinkle some dates in there if you can remember to. They're valuable in a way you might not be able to understand until you're able to look back on 22 years (or more) of them.
Posted by Steve Prescott at 3:51 PM 8 comments: