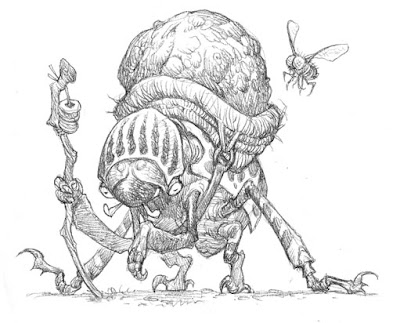 A remarkable and curious species, the Bazaar Dung Beetle of eastern Africa, upon finding a fresh deposit of ungulate dung, will stake an immediate claim, set up a kind of market, and begin pandering rations of balled dung to other dung beetles.  They are the only known insect to use an actual "free enterprise" system and one of only two to use a form of monetary currency.  The other being the Debt Weevil in Honduras which, despite not having any money, will rack up insane charges on multiple high-interest accounts.
Posted by Steve Prescott at 7:58 PM 2 comments: 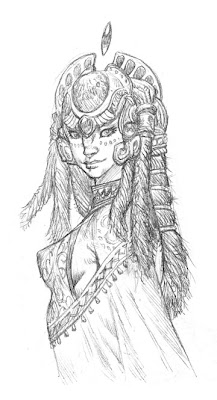 Watched the kid all day - then painted all night - don't have much left over for high concept sketching (usually don't) - so a simple pert princess with a gaudy headdress will have to do.  Ungulate Dung tomorrow.
Posted by Steve Prescott at 12:11 AM 2 comments: 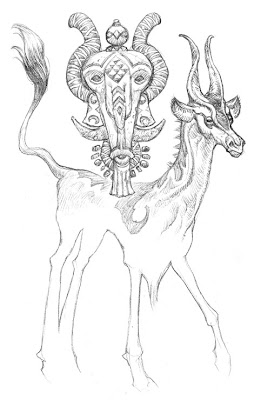 Two things I really enjoy drawing (but don't often get a chance to do so) are weird pseudo-African masks and weird pseudo-ungulates.
Originally, this sketch was just the mask part, but I still had a little bit of sketchin' in me to shake out so I added the ungulate.
I like the word ungulate.  I also like the word dung.  Maybe my next sketch will be of ungulate dung.
Posted by Steve Prescott at 10:55 PM 2 comments: 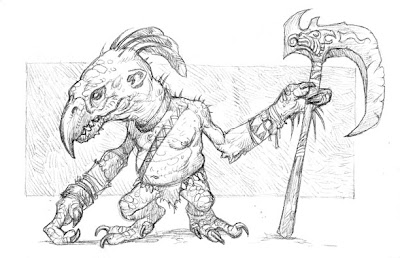 Xee-nork was an up-n-comer, an exuberant skirmisher and an enthusiastic late shift guard.  He had every intention of protecting the carrion reserves with the gusto of an angry zealot - and he would do so to the death if need be.  For nothing was as delicious as a grilled-carrion sandwich.  With a pickle on the side.
Posted by Steve Prescott at 8:29 PM 5 comments: 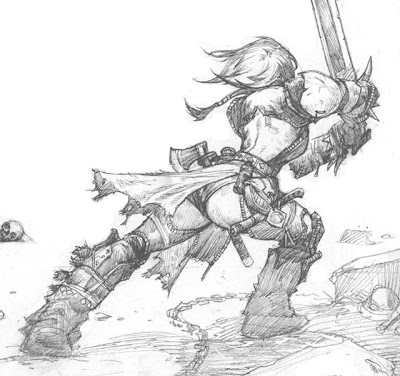 Perhaps this is a bit of cheating but, hey, to get through the next 9 weeks with my sanity intact, I'm going to have to bend the sketch-a-day rules a little.
In this case, I polished up a much looser sketch I did yesterday.  This is the alternate version to that barbarian lady from two days ago - and I think it came out pretty nice all considering.  The only problem - the art director said I had to cover up the flirty little butt flash under those ragged barbarian garments.  Yeah, it is going to be on a book cover - but I've seen much more risque artwork on book covers before - this is nothing.  And besides, the target demographic? Pervy, repressed adolescents.
Oh well, a little bit of artfully placed cloth won't dismantle the image as a whole.  Maybe when the painting is returned I'll go back in and restore it to my original vision.  And sell it to Sir Mix-A-Lot.
Posted by Steve Prescott at 12:06 AM 1 comment: 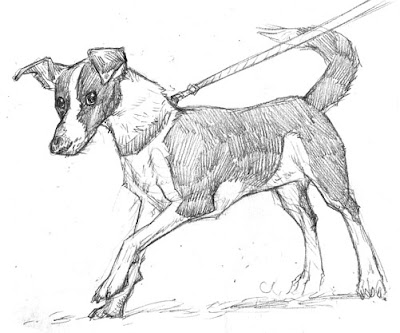 Did a fairly quick sketch of our dog Soda in one of her calmer poses - straining slightly at the leash.  She's some sort of amalgamation of terrier types - probably Jack Russel, Rat Terrier, maybe even some Border Collie in there somewheres - plus, she's a bit bigger than the average terrier - coming in at about 35 lbs.  Anyway, she's a killing machine.  She has eradicated rabbits and vanquished moles from our backyard - put the beat down on groundhogs, racoons, and possums, too.  If she could climb or jump about three feet higher, there would be no more squirrels either.  If she catches a whif or a glimpse of a "prey" animal, all normal "pet" modes stop and the only program running is "seek-and-destroy".  Honestly, she goes from pet dog to completely insane wild animal instantly - the battle at Falkirk or a tsunami of sirloin steak could be happening all around her and it would not affect her focus in the slightest - so needless to say, using the normal verbal commands in such situations, well, I'd get better responses getting a brick wall to sit and heal.
Yesterday she caught the smell of a mouse in the house and it was on.  And her brain doesn't turn back on until it is satisfied with the elimination and death of the varmint.  So I had to contain the dog and outsmart the mouse into running into a small cereal box trap I slapped together.  Then I had to go outside and let Soda dispatch the little bastard lest she be a basket case in the house for days - and I'm not kidding about that - if she doesn't feel the kill, she will frantically skitter around the house smelling every nook and cranny over and over and over and over again......for DAYS!  What a dingbat!
Posted by Steve Prescott at 11:05 PM 1 comment: 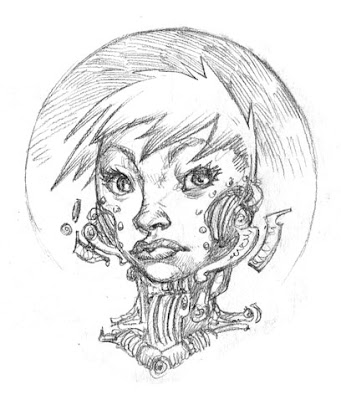 Another rough time of trying to get some architecture to look interesting on that cover piece.  Almost went to bed without completing my first week of daily sketches - managed just enough enthusiasm to whip up this little ho-hum head shot - which will most assuredly blow you all out of your socks!  Not.
Posted by Steve Prescott at 12:02 AM 1 comment: 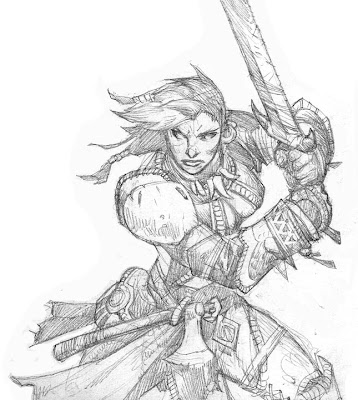 Today I spent most of my time trying to lay out and draw up a cover I am doing for Paizo Publishing's Pathfinder series.  Somedays I can knock out a cover drawing in a couple hours - other days it is like flogging myself with a spiked pool cue - things just don't fall into place and my eraser gets decidedly smaller.  I respect the process and the struggle of searching for the right drawing in the big pile of crap - but that still doesn't mean it ain't frustrating.
There's also times when you toil and toil and finally lay down a pretty nice drawing only to realize it just isn't going to work for reasons that have nothing to do with drawing or even composition.  In this case, I drew up Pathfinder's iconic barbarian and realized my intentions weren't going to work with her facing the viewer and that I was going to have to redraw her completely from scratch.  I hate wasting a good drawing but it is for the better good of the piece.  So here's the nixed pose.  Much like Mad Max, it exists now......only in our memories.
Speaking of Mad Max, what about that Lord Humungous guy?  He wears a hockey mask, a skimpy S&M outfit, and straps corpses to the front of his vehicle, but he seems like a reasonable man.
Posted by Steve Prescott at 10:24 PM No comments: 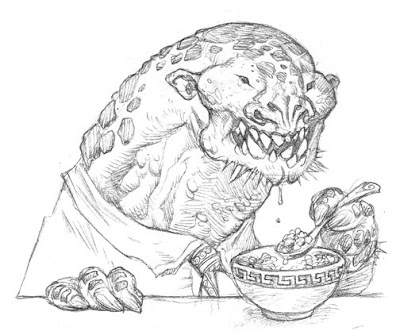 Hector followed his usual morning pattern - brushing his teeth, taking a shower, dressing, making the bed, making a cup of coffee, watering the fern, checking the scores in the sports section of the newspaper, pouncing on and fiendishly shredding the flesh of a captured pedestrian that he had harvested from the sidewalk the previous evening.  But today was going to be different.  Today, instead of toast, he was going to have raison bran cereal.
Posted by Steve Prescott at 9:10 PM 4 comments:

I reckon I needed a fancier header to go with this here blog.  Also, prehistoric fish are pretty cool - but thank the four winds they don't exist anymore or I'd never go swimming ever again.  What's that you say?  Coelacanths still do patrol the world's waters? - seeking water-treading primates to inflict malicious and nightmarish pain upon?  God help us.  Gold help us all.
Posted by Steve Prescott at 3:21 PM 1 comment: 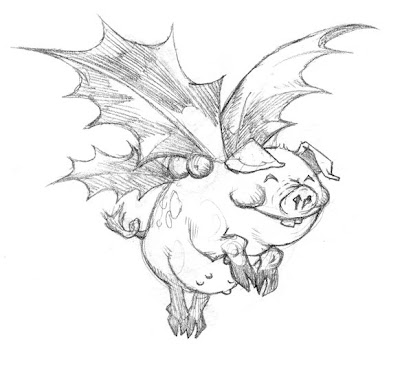 We have a fantastic petsitter - very caring, conscientious, reliable, overly nice - all the traits you'd want in a person being in your house when you are away, dealing out drugs to cats, and shuttling a spazzy dog around town.  Our petsitter wants a tattoo.  Her name is Holly Bacon.
Posted by Steve Prescott at 2:26 PM No comments: 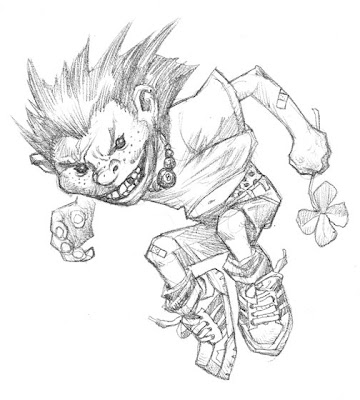 One of my favorite XM Radio stations is "Hair Nation" - they play nuthin' but hair metal from the glory days of the 80's - everything from Kix and Krokus to GNR and Skid Row.  And most mornings I get up with my daughter and we eat breakfast and listen to sweet, sweet cheesy hair metal.  Today, I turned it on and the first song I heard was Winger's "Madalaine".  And in that song, sexy Kip sings this line: "All your glory was left like and angry child - waiting to take your luck away" - which conjured up a fun visual.
Years after the Hair Metal heyday, Kip (promoting his solo album) played a live acoustic show at a bookstore here in Columbus - and despite my expectations, it was quite cool - Mr. Winger was really funny and humble and his music sounded great trimmed down to just him and a guitar.  By the way, acoustic "Madalaine" = awesome.  I'm not being sarcastic - it was F'n sweet!
Posted by Steve Prescott at 12:46 PM 2 comments: 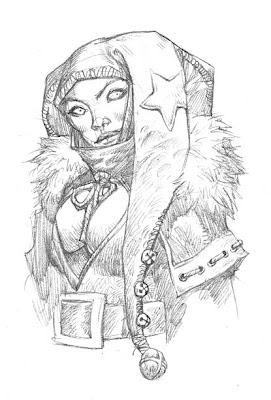 What am I doing?  This is madness.  A sketch every single day for a year?  Not that sketching itself is hard - I loves me some drawing and doodles come excessively natural for me.  I mean, I spent 95% of my high school classes doodling.  I can fill the entire table top with crayon drawings by the end of dinner at Macaroni Grill - masterfully avoiding olive oil drips and sauce splashes.  No, the drawing is the easy part.  The daily commitment of it though?  That will test me.  I'm not one to tote a sketchbook around and draw anywhere - at parties, cafes, adult bookstores, secret underground cult chambers, etc.  I rarely even draw just sitting around the house - of course, this could be that if I have time and the creative juices are flowing, I usually apply that energy to whatever pressing gig is currently on my plate.  I'm just not really a casual sketcher.  But maybe, just maybe, this little Sketch-a-Day thing will prove me wrong - that I WILL be able to muster or redirect motivation for something even as simple as drawing a harlequin-hatted dame with an unnerving stare and excessive cleavage.
Let it begin.
Posted by Steve Prescott at 10:59 PM No comments: