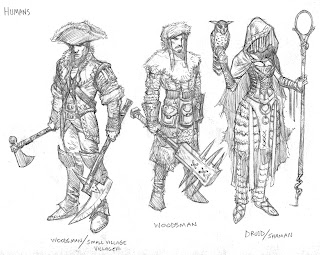 Hope you're not yet sick of Innistrad posts - because I still have more to show!  I think I linked to some of the concept art I did for Innistrad before.  Much of that was probably pencil drawings with some digital color plopped on.  Here are a few of my pencil-only contributions of the work Mike "Daarken" Lim, Steve Belledin, Richard Whitters, and I did in concepting the Magic: The Gathering world of Innistrad.

Above are some samples of humans.  They hold no high status in this world - they are essentially the part of the populace constantly at odds with the rest of the denizens of Innistrad.  They are the prey species - the wildebeests, if you will.  But they aren't push overs.  However crude and utilitarian their clothes, armor, and weapons are, they've got spirit! 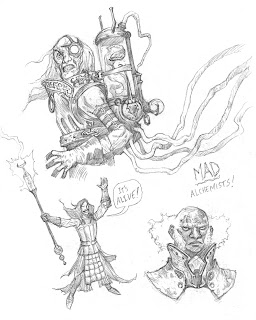 Oh man, working on the blue-aligned alchemist humans were fun! I unfortunately didn't get a chance to do up one in a final illustration but at least I got to dabble a bit at this stage. 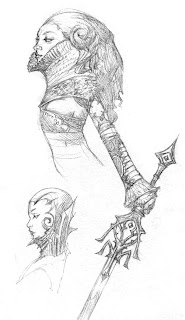 The vampires are the uppity, fancy-clothes-wearing, nobility of the realm.  One of their unifying visual cues was wrought iron design work and filigree worked into both clothing and weapons. 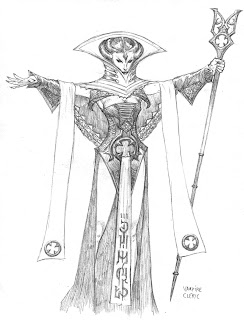 Here's another vampy dame - a cleric.  probably blessing a keg of blood at a sweet vampire frat-party.

If you dig this Innistrad stuff, be sure to slide your internet butt on over to my Art-Blog and see some of the fully painted work I did for set.  Fun stuff indeed!