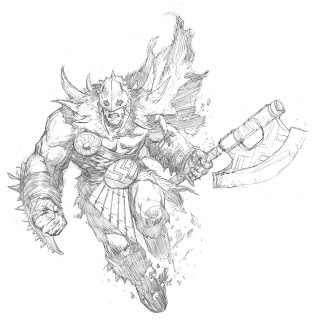 So this week MTV Geek posted a teaser for the Magic: the Gathering promo Planeswalker cards that I was lucky enough to get to do the artwork for.  The five super-rare cards are to be unleashed to the slavering Magic fans at San Diego ComicCon this July.  The teaser showed the Garruk black-on-black promo card as an example of the nifty graphic quality of the cards - completely different from what one normally sees on a Magic card. 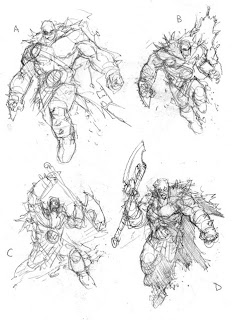 Despite the extremely graphic pos-neg quality of the artwork, I did do these traditionally (well MOSTLY traditionally - there was a bit of digital tweaking and cleaning-up that went on after I scanned them in). As such, there was just as much preliminary work and post work as there would have been had I just been painting these, believe it or not.  I had to plan them out as black and white graphics - establishing bold shapes and elements while letting go of lines and halftones to describe the forms and details.  It was most definitely a "less-is-more" approach - a different and challenging way of creating an image that I wasn't used to but welcomed never-the-less. 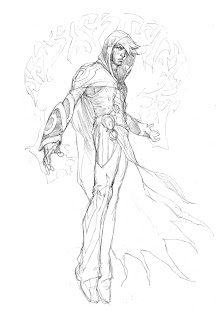 But before that, I had to draw up the right poses for each planeswalker and still establish them as drawings first - with all the appropriate details even though most of those details would get dropped out or covered up. So here's my preliminary work on Garruk as well as Jace.  As far as I know, an image for Jace's card hasn't been released yet but the same image is being used on t-shirts that are being sold at WalMart right now - some I'm thinking it is ok to show the sketch here.

One last thing, there has been a bushel of inquiries about purchasing the original artwork for these planeswalker pieces (apparently, non-digital planeswalker art is hard to come by!). That said, I'm going to be selling all five together in an auction on eBay in the coming month.  Don't worry, I'll post details about that when the time comes so, if you're interested, stay tuned!
Posted by Steve Prescott at 11:45 AM 7 comments: