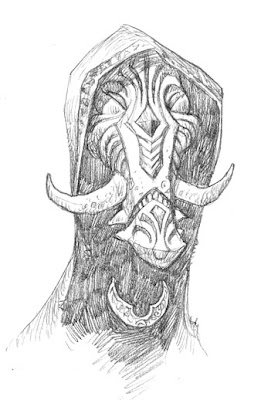 Xantareeka of the Klaazuun plains gazed on her people and wondered how she was replaced so quickly and throughly by this new god:  the ipod touch.  Perhaps a plague or possibly 100 days of raining blood down from the sky would return their souls to her.
Posted by Steve Prescott at 10:31 AM No comments: 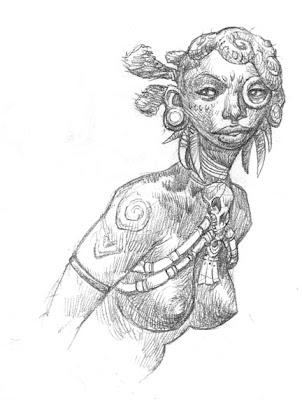 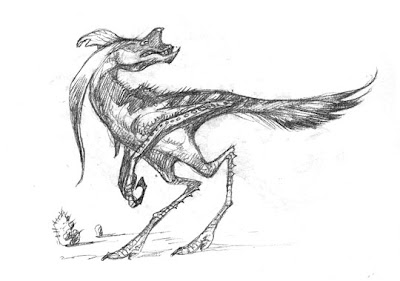 So the reason I haven't posted any of my daily sketches in about a week is that I have been down in Florida basking and beaching and watching my little daughter have a grand old time.  I would have posted about my upcoming mini-vacation on me ol' blogsite here, but I didn't want to advertise that I was out of town.  You see, I don't trust Glick or Fortune a speck and I have a feeling they would jump at the chance to bust into my vacated home and start defecating on all my stuff again.  I wouldn't mind if it didn't take so long to clean up but, well, you get the idea.
So anyway, Florida is where I was.  And sketching and me don't mix much when I'm on a trip of leisure - I just never get the hankering to do it - when I do try to do some drawing, my brain revolts and I fall asleep or get blotto on cheap margaritas.  So, I must admit, all but one of my catch-up sketches were done on the plane rides to and fro.
Here are my last two - I had an inspiration lull with the blando alien dinosaur thing but was able to kick start again with a little bare boobage.   Scroll down to check out the other four.
Posted by Steve Prescott at 11:27 PM 1 comment: 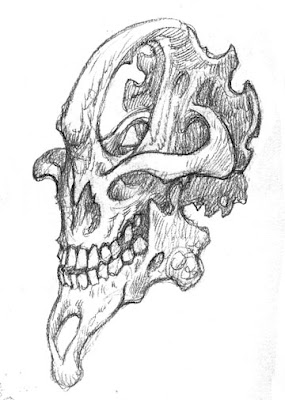 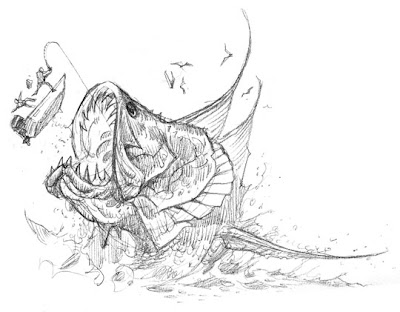 Florida has been fished into oblivion.  I seriously can't believe there is a fish left in the Gulf of Mexico.  Everyone down there fishes and everyone that goes there fishes.  One day a huge Tarpon-God will get some vengeance.
The other sketch is a stupid skull.
Posted by Steve Prescott at 11:23 PM 2 comments: 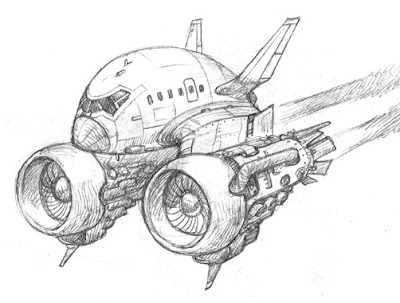 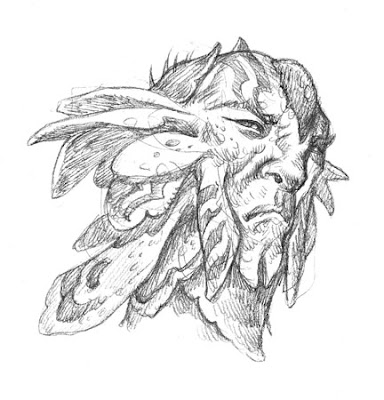 Here's the jet I rode on down to the land of sun, oranges, and old people.  The other one is a portrait of one of the flight attendants.
Posted by Steve Prescott at 11:17 PM 2 comments: 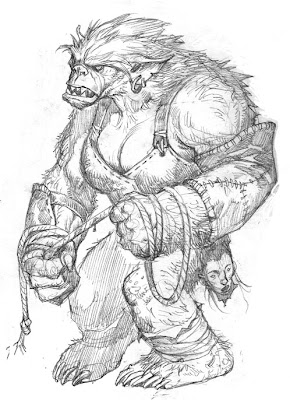 So i come home this evening thinking I had a light work schedule for the night - all I really wanted/needed to accomplish was one sketch (for work) and then I could relax and crank out a sketch-of-the-day.  Unfortunately, I checked my e-mail.  And e-mail had a little present for me - I found out that I have to go back in to a painting that I thought was done and over.  And not just a little tweaking - I have to go in and actually increase the entire size.  This rarely happens - but let me tell you, when it does, it is NEVER convenient.  So I had to do much more work tonight than I thought and I'll be working tomorrow, too (sucky!).
Anyway, you get another rehash sketch from yor.  Here's a bugbear throttler I did last summer.
Posted by Steve Prescott at 12:47 AM 3 comments: 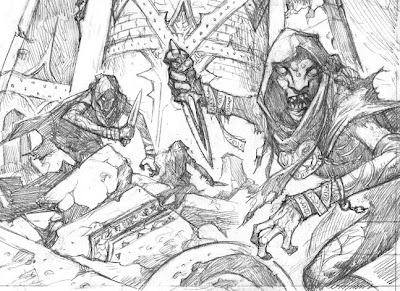 Well, in order to reach my goal of getting a couple straying projects done by the end of the week, I had to work like a mutha most of the evening and well into the night.  I was left with enough room to post something on this here blog, but not really enough time to do a sketch - as I am DEAD tired.  So instead, here's a detail of an old sketch - a cover for a Forgotten Realms book I did well over a year ago.  Creepy weirdos in shabby clothes with daggers - every single woman's dream.
Posted by Steve Prescott at 12:52 AM 1 comment: 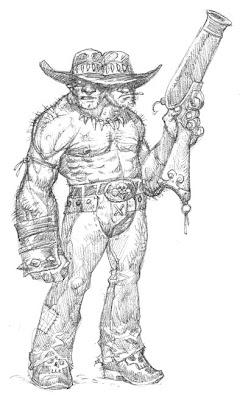 Continuing with the wild west theme......
Zeek and Logan Parnell (better known as the Gemini Brothers) got most of their business done by threatening either to punch you through the side of a boxcar or to blow your head into the middle of Kansas with their canon-rifle - which they liked to call Ol' Head-blower-offer.
Posted by Steve Prescott at 12:33 AM 1 comment: 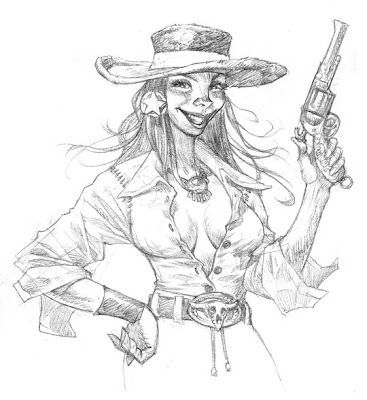 I've been wanting to draw some western stuff since I started this whole sketch-a-day thing.  Cowboy hats are especially fun to draw.  The more beat up, dinged, and hard-ridden the better.  And here's a little known fact - did you know cowgirls only ever buttoned one button on their shirts?  It's so true.
I just went to see the band Delta Spirit this evening.  Damn good show.  If you haven't heard them, look 'em up - they be good.  And singer dude has great lungs.  This has nothing to do with cowboys - or even sketching - but oh well.
Posted by Steve Prescott at 12:12 AM 5 comments: 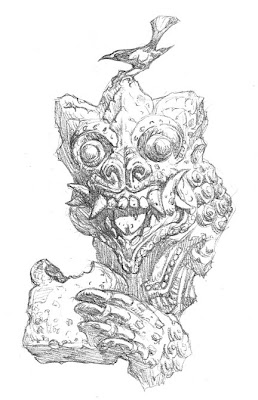 In ancient Bali, cheese-n-mustard sandwiches were standard religious fare - even devils and demons were depicted partaking in the cheapo college student staple.
Posted by Steve Prescott at 11:47 PM 1 comment: 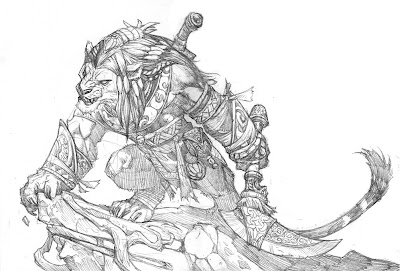 In shaking that last few kiloliters of mucus from my head and face, I have lost the ability to get a good night of sleep.  So tonight I am foregoing the regular sketch and instead posting a rough I did for a Magic: the Gathering card a little while back - I jumped back into it, polished up a few details, and took out some slopped-in background stuff.   Yes, it is still cheating.  So sue me.  Actually, don't sue me - my lawyer was hiking around in Canyonlands National Park and got eaten by a malicious, beweaponed lion-man.  What an extremely sucky coincidence.
Posted by Steve Prescott at 12:12 AM 8 comments: 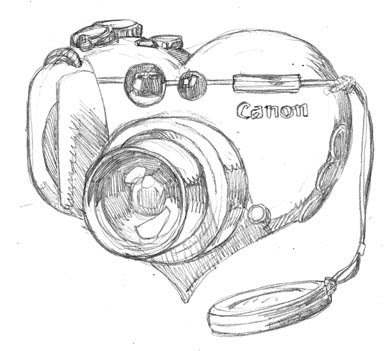 Another long day of catching up on work took me way into the night once again.  When it came time for my daily sketch, I realized it was (technically) Valentine's Day.  I drew up a Valentine card (which I will ink and color) for my lady - the card depicts the true love of her life: her Canon PowerShot G3 which has been a spectacular workhorse for us for some 5 years now.   She has taken somewhere between a kabillion and a gazillion pictures with it - most of them really damn nice.  Indeed, if a great shifting of the planet's tectonic plates opened up a bottomless chasm and she had to decide whether to save me or her PowerShot from falling into oblivion, well, let's just say I pray the tectonic plates stay where they are for a while.
Posted by Steve Prescott at 12:46 AM 2 comments:

Well, I missed my first Sketch-of-the-day.  But it wasn't out of neglect or laziness (strangely enough - because I'm a pretty lazy and neglectful guy).  No, I got the big BEATDOWN from an ancient enemy of mankind: RHINOVIRUS.  That's right, the common cold.  I mean, I got it big time, too.  You remember at the end of Raiders of the Lost Ark when those stupid Nazi chodes opened the ark and their faces started melting?  That's exactly how I felt (and probably looked) - except I didn't receive the sweet release of death at the end.  Sometimes I can work just fine with a little bit of the sniffles - but this time I could barely muster the energy to fast forward through the commercials on LOST - let alone fire enough synapses in my brain to do a sketch and then use the computer.
And so I defer to today where I am doing a double-post to catch up.  The wretched sickness set me way behind on my schedule and so my sketches will have to come from the work I was doing all day today.  This particular job is to do a line-up of races in their skivvies to show their common body types.  Yes, pretty silly - but fun none-the-less.  At the top is a half-elf - and below, for all the ladies, a pretty buff half-orc.  No HGH there - that's pure orc genes at work. 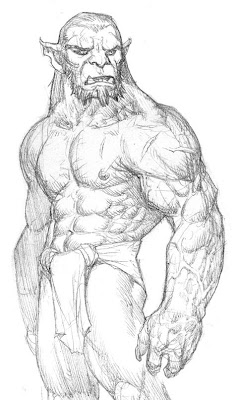 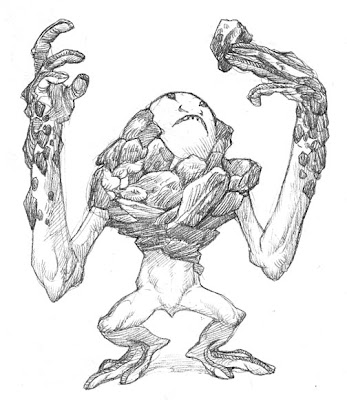 On the distantly distant world of Gruumsilt, Gruumsiltians accessorize with rocks.  This particular Gruumsiltian is having a wardrobe malfunction right before his big stand-up comedy act.
Posted by Steve Prescott at 10:23 PM 1 comment: 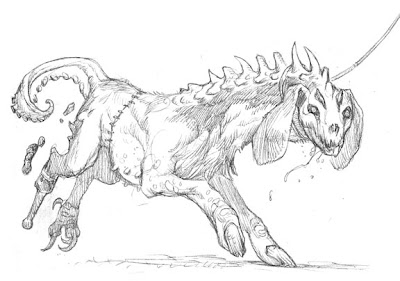 -The Westminster Dog Show 2009-
Even in the new category of "Hellish Fiend",  Tasha still secured the Absolute Worst Ever In Show award.
Posted by Steve Prescott at 11:11 PM 6 comments:

Besides the minotaur from yesterday's post (which I had rolling around in my head since yesterday's  breakfast for some reason), rarely do I have a preconceived notion of what my daily sketch is going to be.  I'm getting into a furiously busy stretch of work and other events and most of these daily drawings are going to have to be squeezed into the cracks and winged.  Much like tonight's sketch - on a break from a painting, I just picked up my sketchbook and gave myself 15 minutes to work up the first decent idea.  In such compact amounts of time, I won't be able to muster high-concept stuff.  Heck, even low-concept stuff.  I'm just going to have to barf something forth and hope there is some semblance of entertainment value to it.  You know, like a toothy river serpent staring down a delicious flying snook.
Posted by Steve Prescott at 11:34 PM No comments: 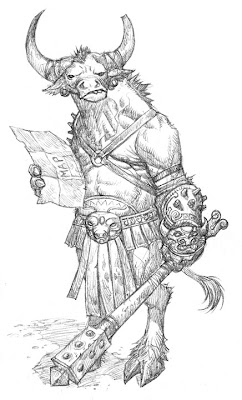 Milton was really going to hear the razzing from the boys down at Ye Olde Feed Trough - and his wife was going to flip at least two stomachs when she found out about this.  Three thousand two hundred years on the job - and gets lost in his own labyrinth.
Posted by Steve Prescott at 9:29 PM 7 comments: 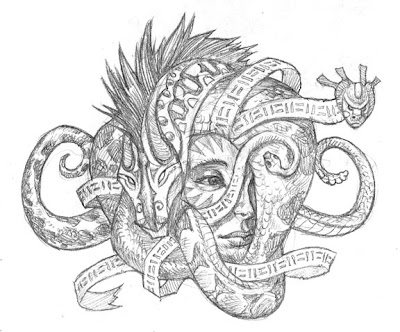 Today I just let the pencil do whatever - I didn't really have snakes on a face in mind - I just started looping shapes around and this weird little vignette was the result.
In other news:  my anaconda don't want none unless you got buns, hun.
Posted by Steve Prescott at 11:39 PM 4 comments: 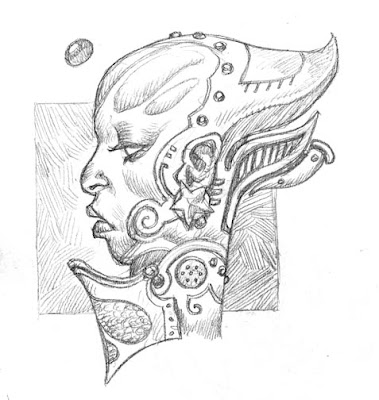 It's late - much later than I thought and hoped.  I just spent the last two hours trying to catch up on contracts and invoices and all the tedious stuff that comes with freelance work.  And I defer my lack of enthusiasm for paper work to this 9-minute quickie.  Just playing with simple shapes - with thoughts of my face on my pillow.....
Posted by Steve Prescott at 12:18 AM 2 comments: 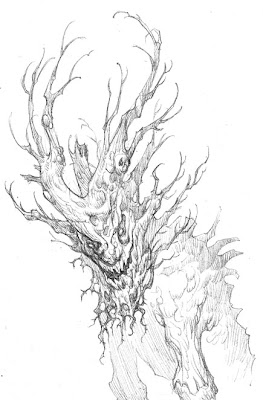 Ken McTreeDude was pretty unhappy about losing all his leaves.  Of course, he did every Autumn and that wasn't a big deal.  But having a dash of Agent Orange slipped into his smoothie by the jerky  Sycamore next door just wasn't very funny.  But McTreeDude found himself snickering woodenly none-the-less as he remembered a nearby rogue sapling that sells parasitic beetles from Asia.  Revenge would be so sappy sweet.
Posted by Steve Prescott at 1:04 AM 3 comments: 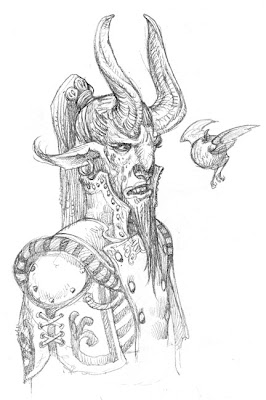 Fyrglog, Commander of the Black Mountain Brigade, didn't know whether to trust the enchanted flying apple's word that the snowgoblin army was crossing the Urdank River to the north, or take a bite.  It was a Gala - and it looked delicious.
Posted by Steve Prescott at 12:51 AM 2 comments: 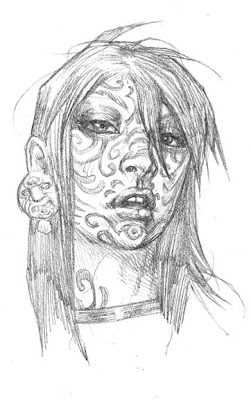 When lacking in ideas and time, draw a hottie with face tats.  Actually, I went a little out of my way and did a slight up angle on the face - something I always struggle with.   Back to the paints now. Until tomorrow.....
Posted by Steve Prescott at 11:09 PM 2 comments: 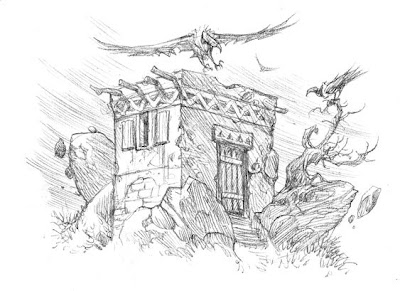 Two weeks in!  And I celebrate with this quick (but ho-hum) pueblo dwelling sketch.  The pueblo that lived in this adobe mansion simply could not rid himself of his severe condor infestation.  Unfortunately because of the housing crisis, after 2137 years, it is still for sale.
Posted by Steve Prescott at 11:58 PM 1 comment: