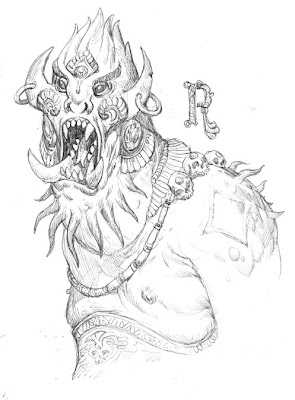 R is for Raktavija
This gargantuan Hindu demon teamed up with other demons to deal an assortment of horrors all over the place. Raktavija had the grisly charm that if ever his blood was spilled, another Raktavija would spring up from every droplet! Eegads, that's a problem! He sounds like a really infuriating level boss for an old Nintendo game or something. Anyway, Kali was eventually sent to deal with this bullshit bastard - finally coming up with the idea to drink all his blood and then kick his ass into oblivion. Nice.
Posted by Steve Prescott at 12:06 AM 4 comments: