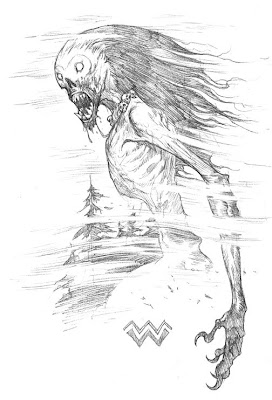 W is for Wendigo
The Wendigo is a malevolent, cannibalistic, and a downright horrible evil spirit common to the lore of north-eastern native American tribes - most notably, the Algonquian Indians. There are many descriptions of this eidolon but most boil down to a gaunt (almost skeletal) humanoid with nightmarish features seen skulking around cold and windy northern boreal forests chowing down on humans. A person can change into a Wendigo or be possessed by one - either causing cannibalism or because of it - not a good thing. And so the Wendigo is kinda the boogeyman of the Algonquians - used to keep tribe kids in line: "Hawk-in-the-Sky, stop biting your brother, you'll turn into a damn Wendigo."
Interestingly, there is a condition called "Wendigo Psychosis" (not kidding) where a sufferer, even in the presence of normal food like Doritos, craves nothing but the delicious flesh of a human - human steaks, human-kabobs, human casserole, human sandwich, human buffalo wings, and human smoothies. You name it - Wendigo Psychotics dig it.
Posted by Steve Prescott at 12:18 AM 7 comments: 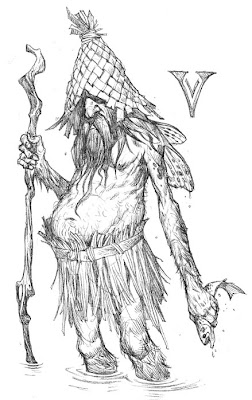 V is for Vodyanik
Vodyanik is a water spirit in Slavik mythology described as resembling a creepy old man with a fat belly, a hat made out of reeds, and a skirt made out of rushes (that fits the description of most pan handlers, doesn't it?).
Vodyanik can be either a malevolent spirit or a benevolent spirit depending on which side of the bed he wakes up on. If the day starts nicely, he may just overturn fisherman's boats - but if the coffee machine isn't working, he's more likely to drown people trying to bathe in the shallows.
In other news:
Be sure to check out my new Rottface News page: rottfacenews.blogspot.com
Especially if you're in the mood for a long-winded recap of my 2009 tribulations. But low, there are some links in the article for new artwork of mine.
And speaking of new artwork - I might not have a new website up (what else is new) - but I did post a bunch of new paintings there - so check out ROTTFACE.COM for some new stuff, too!
Posted by Steve Prescott at 10:35 AM 5 comments: 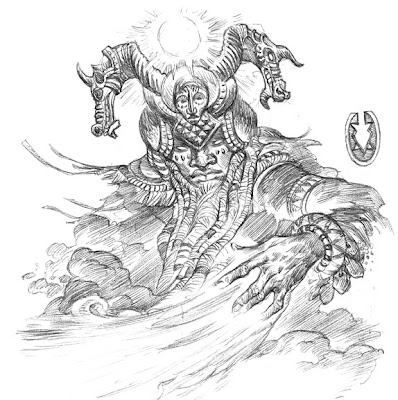 U is for Unkulunkulu
Unkulunkulu is the supreme deity - the sky god - the Ayatollah of Rock-n-Rolla of the Zulus in southern Africa. As the great defender of warrior nations, Unkulunkulu is also regarded as "He who topples kings" and "He who roars so that all nations are struck with terror". Essentially, he ain't no wuss and he ain't no ball boy.
As such, he arrived in the cosmos and made humans out of grass. Then he sent these silly creatures two messengers - a chameleon carrying the secret of immortality and a lizard with the message of death. Chameleons are ponderous and easily distracted so, of course, the chameleon stopped to eat some ants or something and the lizard got to the Zulus first. Alas, the dumb humans took the message of death and missed on the opportunity of partying through the centuries with Connor McCloud.
Posted by Steve Prescott at 11:26 AM 4 comments: