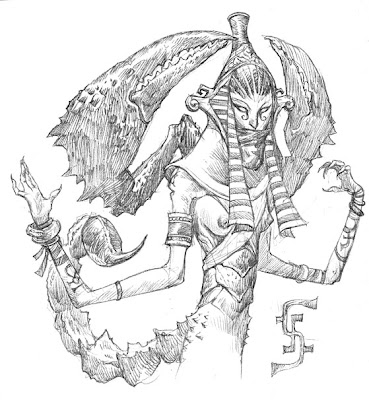 S is for Serqet
The Egyptian scorpion goddess was a deity of poisons, snake bites, and obviously, scorpion stings - either dishing out stings to unrighteous jerks or curing the effects of poisonous bites and stings. Serqet was also commonly known as a funerary deity with the delightfully morbid job of protecting embalmed entrails and was considered either a companion to Isis or an aspect of Isis.
Boringly, Serqet was usually portrayed as either a scorpion or a woman with a scorpion on her head. I think she needed a visual upgrade.
Posted by Steve Prescott at 12:27 AM 8 comments: