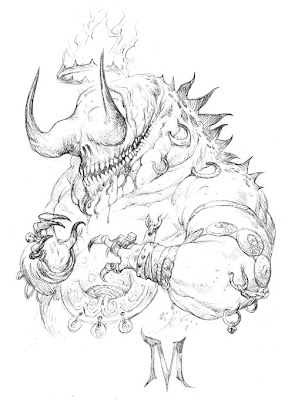 M is for Mammon
Mammon is a demon of Christian lore and is the embodiment of the evils of avarice: the insatiable greed for riches - and riches as an object of worship and greedy pursuit.  From the Bible: "No one can serve two masters. for either he will hate the one and love the other; or else he will be devoted to one and despise the other.  You cannot serve both God and Mammon."
There were a couple good M mythical figures but I had to do Mammon because frankly, I think that greed is the most despicable attribute of humans - unfortunately, there are signs of Mammonism all around us all the time - people making decisions motivated entirely by the pursuit to make as much money as possible no matter what the cost.
Plus, I figured it'd be fun to draw a gross demon.
Posted by Steve Prescott at 12:33 AM 10 comments: 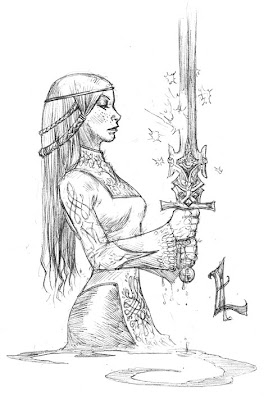 L is for Lady-of-the-Lake
The Lady was a Celtic enchantress that lived in a castle in the middle of a lake.  She raised Lancelot and tossed Arthur that wacky sword and probably did some other mystical crap in between.
Frankly, "L" had a pretty lame assortment to choose from and I just couldn't muster much enthusiasm for the oft-depicted lake dame.  I guess I could have made her a fish-woman or a weedy hag or big and fat just to do something different - but I just want to get past L and back to the good stuff!
Posted by Steve Prescott at 12:26 AM 2 comments: 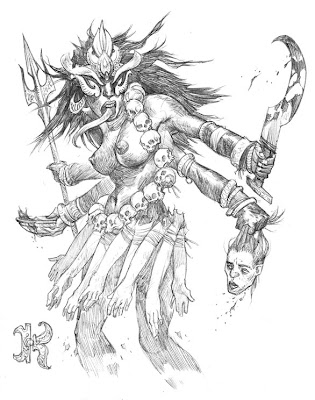 K is for Kali
The most destructive aspect of the Hindu goddess Devi, Kali is an incarnation of annihilation - sent to Earth to destroy demons and probably whatever else was nearby while she was destroying demons.  Well, Kali, wearing her favorite necklace of skulls and a designer skirt made out of human arms, went about her job of laying waste with so much gusto that she didn't even realize it when she cut down her own husband Shiva who was probably just asking if she wanted lentils for dinner.
Posted by Steve Prescott at 8:29 PM 7 comments: 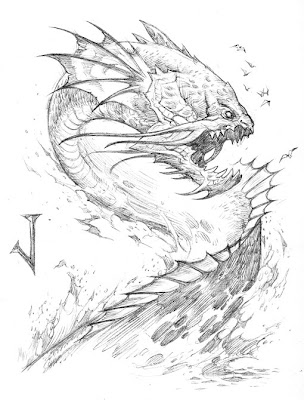 J is for Jormungandr
Fathered by Loki, the gargantuan sea serpent Jormungandr has a pretty important role in Norse mythology - or at least will eventually - as Jormy's role hasn't happened yet.  You see at Ragnarok, the epic serpent  is destined to bust onto the scene and cause all sorts of problems like spreading clouds of poison, steal library books, etc.  It will culminate in one last head-to-head fight with Thor - they will trade body blows until Jormungandr will finally be slain.  Unfortunately, Thor will then drown in the sea serpent's venom.  Booyah!
Posted by Steve Prescott at 10:56 PM 6 comments: 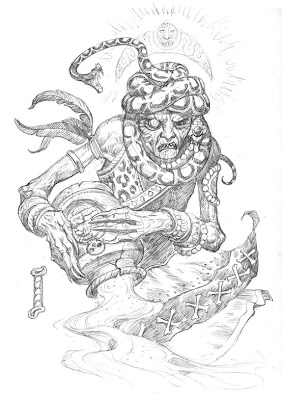 I is for Ixchel
The malevolent moon goddess in the Mayan pantheon, Ixchel was often shown as a withered old woman crowned with a snake and wearing a skirt decorated with crossed bones (actually that sounds like normal attire for girls at rock concerts - those crazy youths).  In her clawed hands she held a vessel filled with destruction which she not-so-nicely pours out onto the Earth.
I almost did the Mayan goddess of suicide, Ixtab - I'm not kidding, they had a goddess of friggin' suicide!  Even better, the goddess of suicide is a partially decomposed corpse hanging in a noose from a tree limb.
Ya gotta give it to those Mayans, even their least morbid gods probably ate brains and pulled teeth and wore flayed human skins.
Posted by Steve Prescott at 1:55 PM 2 comments: 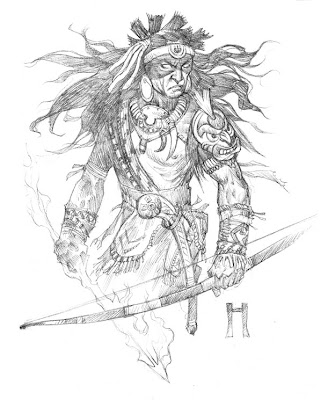 H is for Hino
The God of Thunder and guardian of the heavens in Iroquois mythology - a hater and destroyer of monsters and other scumbaggy spirits.  Armed with a tremendous bow and arrows of flame - Hino saved the humans from the mighty serpent of the Great Lakes and sent it back to the sky to lick its wounds.
There is no mention of whether Hino can defeat the loathsome Zebra Mussel - but I can only assume that a giant flaming arrow or two would probably do the trick.
Posted by Steve Prescott at 12:33 AM 6 comments: