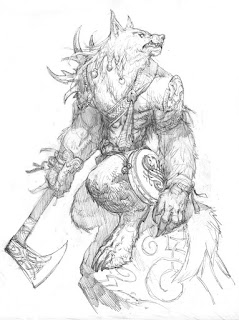 Back in Spring I got contacted by an old, familiar company.  It was White Wolf Games.  My first true freelancing gig was with White Wolf just before I graduated from CCAD in 1995.  I then proceeded to spend the better part of the next six years being a work horse for the horror-based RPG company - illustrating for nearly all their World of Darkness properties: Vampire, Changeling, Hunter, Mage, and most notably Werewolf: The Apocalypse.  Indeed, much of who I am as an artist I can attribute to my years drawing and inking hundreds and hundreds of were-animals of all shapes and sizes and of all cultures and character. 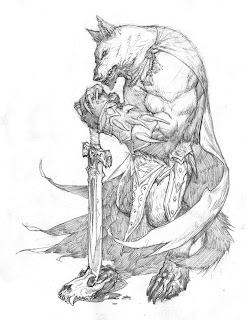 The more I inked illustrations for White Wolf, the better I became - becoming a student of how Mike Mignola composed his images with line and large shapes of moody black.  Mignola's love of mythology and mythological paraphernalia and design motifs seeped into my own bones as I was called upon to develop the looks of each werewolf tribe (which were often tied to geography-specific history and mythology).  This attention to design and antiquities from ancient cultures still heavily persists in my artwork today. 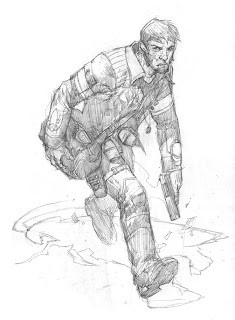 And of course, I developed a pretty good ability to take pretty much any animal and anthropomorphize it - a skill incredibly useful in pretty much any fantasy game I have worked on since then.  Being able to draw a snarling, slavering predatory mammal head is something I barely go a week without having to do in some form or another. 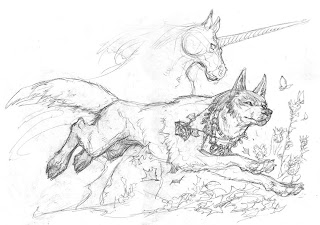 But it's been a while - I can't remember the last Werewolf project I worked on, nor when that was.  It was probably around 2002 shortly after they restarted all their properties - which was shortly after they ended the previous epoch with "the Apocalypse".  Which was ok by me.  I felt that I had put my fingerprints all over their brand - with the new brand starting, maybe it was time for a new anthropomorphized-creature artist to step in.  Plus I was starting to do more and more color work and there just wasn't enough of that to go around with the mostly black-n-white books for White Wolf.  Since then, the only White Wolf project I have worked on was one short gig doing a slew of Changeling full-figure spot illos. 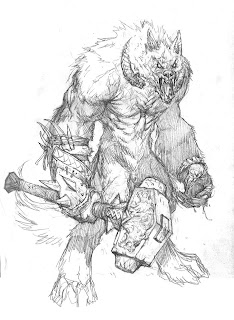 But then I get this e-mail from Rich Thomas (who seems to have been at White Wolf as long as anyone) saying that they are working on a 20th anniversary Werewolf: The Apocalypse book and that they'd like for me to do full-color figures for each of the 13 classic Werewolf tribes plus the 3 "lost" tribes.  The chance to go revisit those old lycanthrope friends, well, I just couldn't pass it up.  White Wolf helped me pay my bills for a long time. The art directors allowed me room to learn on-the-job and to experiment with all sorts of different b/w techniques - some of it worked well, some did not.  And sometimes my art strayed too far into being cartoony.  But generally I'd like to think I gave them some nice artwork over a great many books.  So putting my Werewolf:TA boots on again, was not only sweetly nostalgic and still comfortable, but also a pleasure. 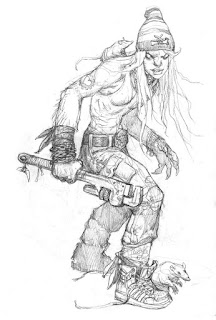 Pictured in this post are a selection of my cleaner drawings of the 16 illustrations I did for the 20th Anniversary issue.  Enjoy!
Posted by Steve Prescott at 10:26 PM 46 comments: