10 THINGS TO BE THANKFUL FOR BESIDES THE OBVIOUS - #10 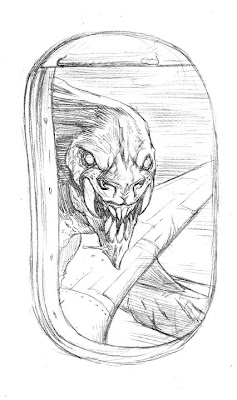 I love to travel - to go places. While I prefer road-tripping and just incorporating the process of getting there into the adventure, I surely don't mind how a massive tube of metal with wings fossil-fueling its way through the sky can get you there much quicker. I kind of endure the airplane thing - it's not nearly as much fun as when I was a kid. BUT BUT BUT, it's all worth while if I get a window seat and a nice crystal clear day.
I know I indulge in hyperbole quite often - too much even, but I don't think it's too hyperbolic to say that I find looking down at geography and terrain from 30,000 feet CEASELESSLY fascinating. Honestly - the plane landing or a serious headache would be the only thing to stop me from enjoying the abstractly fascinating textures and colors of a landscape scrolling slowly by.
I once had a flight straight from Seattle to Columbus - a beautiful cloudless day. Most of the 4+ hour trip I spent with my head firmly pressed against that little oval window looking down at the crazy quilt-patterns of the plains - the strange circles and half-circles - the dirt roads that matriculate aimlessly up into the Black Hills - strange man-made structures in the middle of nowhere - the gleam of a tiny little car on a lonely farm road (wondering what the heck that person was up to at that moment) - how streams and rivers divide farmland - the weird colors and shapes of retention ponds - and trying to guess where our plane was according to that urbanized area way over there by that lake.
It's one of the most interesting things in the world to me - and that's why, with a trip to Florida to escape the dregs of Winter in the next month, I wrap up my Things to Be Thankful For Besides The Obvious by being thankful for: WINDOW SEATS.
And here's my "Twilight Zone" tribute (still to this day one of the creepiest and most entertaining things I have seen in a movie...)
Posted by Steve Prescott at 12:12 AM 6 comments: 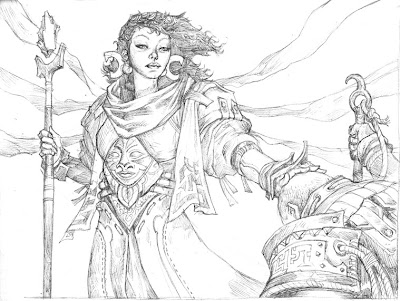 On my Rottface News blogsite, I have posted links to what some of my talented friends from art school days are currently up to. Well, I MADE these friends in college - they are still close pals today. What is interesting is how diverse our creative paths have gone yet essentially fueled by the same creative drive. So go on and give it a look.
To catch your eye, I have put up a Magic: The Gathering rough for the Zendikar set. "Soul Usher" it be. She's rubbing a medicated salve onto the warrior's scalp.
After my last "10 THINGS TO BE THANKFUL FOR BESIDES THE OBVIOUS" entry, I will be kicking off a month-long series for February that should be pretty fun - so keep checking in!
Oh yeah, and as always, if you like my pencil marks, perhaps you'd like my book? Take a LOOK.
Posted by Steve Prescott at 12:51 AM 1 comment:

10 THINGS TO BE THANKFUL FOR BESIDES THE OBVIOUS #9 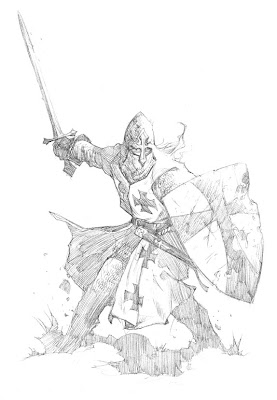 I can't imagine a more substantial and praise-worthy jump in technology from one generation to the next as there was in the jump from VHS to DVD. Even going from audio cassette to CD pales in comparison to what you got with VHS and then stepping up to DVD. Obviously, there are many reasons for this - but I am going to concentrate on my favorite aspect of buying/owning DVD movies: The EXTRAS! (and even more specifically: commentary tracks!)
As a bit of a movie geek, I love getting even more out of the movies I love than just the movie itself. Sure, many DVD extras are fairly mediocre bells and whistles - 10 minute featurettes and unsatisfying behind-the-scenes stuff. But with most movies that grow a cult following (I suppose you can call these "Guy" movies), the extras can and usually are nice and juicy.
FX breakdowns, "making-of" mini-docs, cut scenes, interviews, etc - I dig all of it. As a freelance artist looking for something interesting to listen to while I toil at the easel, my favorite are the commentaries. I love all the insights from the directors and writers (and actors sometimes) - explanations why/how they filmed certain scenes, chatter about locations, tidbits about how they cut corners - even the REALLY trivial stuff like (for example) Viggo breaking his toe when he kicked an Uruk-hai helmet in Two Towers. I just eat it all up.
So, today I say thank you for: DVD EXTRAS. Countless hours of late-night working have you kept my ears and brain entertained. This post was inspired by the extras on my "Kingdom of Heaven: Director's Cut" DVD - which are awesome. I didn't know what to draw to represent DVD extras so I just drew a crusader guy to represent one of Ridley's best flicks (which is saying a lot).
Not all commentaries are great. I have heard commentaries where the director stumbles through the movie just saying what is happening on the screen - useless! Predator, sadly, has a fairly lame commentary like that. But here are some DVD commentaries I dig especially:
Alien (Ridley knows a few things....)
Aliens (Cameron is interesting but the cast members (paxton, Henrickson, etc) are hilarious!)
Alien3 (go watch the re-cut version - it's a lot better and the commentaries are really interesting - as well as the extras)
Gladiator (Ridley again - good stuff. Great extras, too)
Lord of the Rings Trilogy (so many commentaries.....all good)
Conan the Barbarian (Milius and Arnold - you get the feeling Arnold had sex with every female on the set)
Seven and FightClub (Fincher, like Ridley, are way smart, very interesting, and enthusiastic - Pitt and Norton are funny)
Big Trouble in Little China and The Thing (Carpenter and Russell are profoundly entertaining to listen to)
Apocalypto (Gibson is an ass in real life - but his movies are awesome and this commentary is great)
Shawshank Redemption (Great stuff from Darabont)
Beastmaster and Equilibrium (both these B-movies have tremendously interesting commentaries about filming on a low budget - Equilibrium especially - check 'em out!)
Posted by Steve Prescott at 10:48 AM 12 comments:

10 THINGS TO BE THANKFUL FOR BESIDES THE OBVIOUS #8 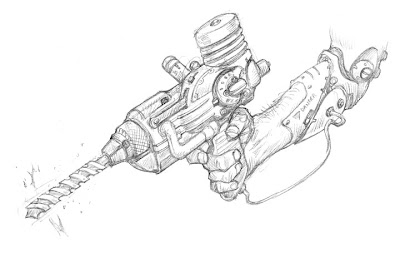 By far, the most useful household tool (at least in my house) is the POWER DRILL. Yes, the hammer comes in handy a lot, the stud finder, the level, needlenose pliers, jar of miscellaneous screws, etc - all are useful and every household should have them - but the power drill (for drilling, unscrewing, screwing (screws), and torturing naive tourists) seems to be brought out every other day around here.
There might be a few out there that have bought into the hype that duct tape is one of those things to always keep within reach - that duct tape alone can keep a house functioning well into the post-apocalypse. Frankly, I almost never use duct tape for anything other than making last-minute costumes for Halloween (or binding naive tourists). Mind you, power drills won't be too useful when the infrastructure of society collapses - but still, POWER DRILLS, baby -POWER DRILLS!
Posted by Steve Prescott at 2:38 PM 1 comment: