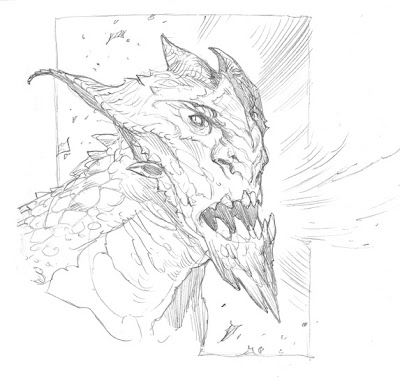 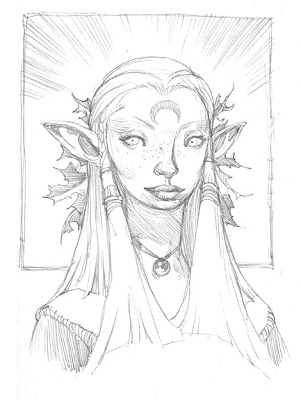 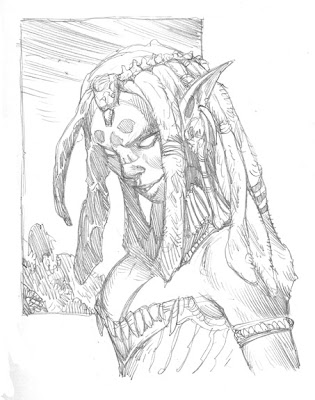 While I try and muster the post-holiday energy to make three more installments to my "thankful" miniseries, I thought I'd post a few random sketches that I have put in Limited Edition AGGREGATE copies.
Speaking of that, if you have no idea what AGGREGATE is, well, it's a book of a whole bunch of my drawings. Here's my official ad (which doubles as a pleasant distraction from my ever-languishing website that I promised to update like 5 years ago). The limited edition copies are suddenly going fast - thanks to THIS flattering post by Dan Dos Santos on the most excellent MuddyColors blog.
And speaking of self-centered hyperlinks, I have a long-winded 2010 look-back post on Rottface News if you have the interest.
Hope everyone has had a fantastic year and that y'all have a great New Year's. Thanks for all your look-sees and comments - and to everyone that parted with their money for a copy of my book! Take care and see you in 2011!
Posted by Steve Prescott at 1:31 PM 7 comments:

10 THINGS TO BE THANKFUL FOR BESIDES THE OBVIOUS #7 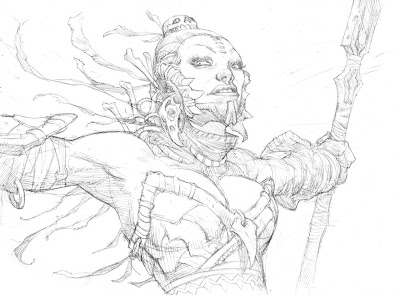 Armor that favors sex appeal over protecting vital organs.
Why should I be thankful for this? You take away cleavage-accentuating armor and pointy toothed creatures and fantasy art doesn't exist. And I'm left to mow lawns for a living. And I'm not even that good at mowing lawns.
Posted by Steve Prescott at 11:26 PM 5 comments:

10 THINGS TO BE THANKFUL FOR BESIDES THE OBVIOUS #6 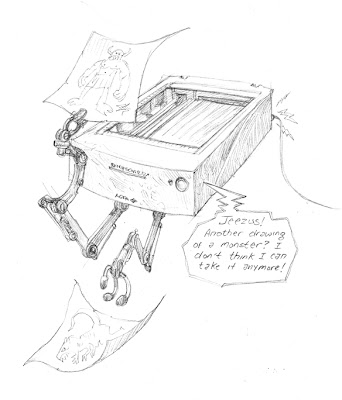 We live in the day and age of planned obsolescence. Makes me sick. To think that people actually design crap to perish and need replaced after a very short lifespan, when, obviously even to a layman, they could make it last for decades with little maintenance! Christmas lights and everything tech-based come to mind as the leaders in this frustrating and disgusting practice .
But even with built in short life spans, sometimes you get something that totally defies the system. First of all, I have a Zebra Danio (a tiny inch-long fish) that is at least 6 years old. It has looked like it got stepped on and spent some time in a garbage disposal for the last few years - Many times I thought it was dead - yet, there it is, still flitting around my aquarium - eluding the little mer-grim reaper.
But secondly, is my scanner. It's an AGFA Snapscan 1212 that I think I bought in 1998 or early '99. It has been my workhorse for all those years - scanning no less than 8000 (but probably much much more) drawings and paintings for me in that time. It has long since lost the lid which broke off like 5 years ago. And for the past two years or so, the power line connector has been really touchy so I have to unplug it and then plug it back in to get it to work. But it keeps kicking and doing what I bought it to do - so I keep using it.
Over 11 years of life and use from a computer component is unheard of! Anything that sticks it to greedy-ass companies that design shit to break down so you have to buy a new one more frequently is exactly the kind of thing that warms the cockles of my heart. Bravo to AGFA, even if I have the only 1212 that lasted longer than 4 years, I applaud them for letting this one slip by them on the assembly line.
Yet, I'm seeing the signs of approaching death for the old girl. She's a bit more persnickity about starting up these days - it's taking a bit more attention and fiddling to get it scanning. But, even with death so close, it still works - and I keep scanning.
Thank you, AGFA Snapscan 1212 for your many moons of honorable and courageous service!
Posted by Steve Prescott at 8:41 AM 7 comments: