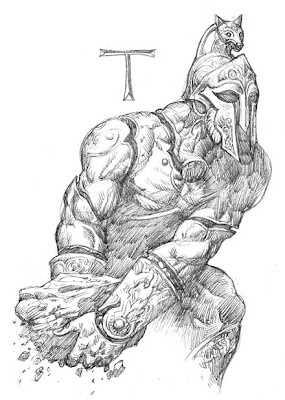 T is for Talos
In Greek mythology, Talos is a giant made out of bronze that Zeus sent to protect his hottie-of-the-week Europa on the island of Crete. Talos patrolled the shores thrice daily and heaved huge rocks at any sketchy lookin' boats that got close to the island. Even though he was a GIANT MADE OUT OF BRONZE for God's sake, he was also imbued with the power to glow red-hot and take intruders in a fatal embrace - I guess this was in case he somehow couldn't crush them with rocks. Or his fists. Or his feet. Or whatever.
Talos, however seemingly invincible he might seem, was crafted with a tiny little weak spot in his ankle - a small vein that was the supplier of lifeforce to this towering automaton. And of course, when Jason and his Argonaut buddies came bopping along, some lucky chump named Poeas, probably aiming for Talos's head, missed horribly and struck him in the ankle. End of Bronzy.
Posted by Steve Prescott at 11:16 PM 7 comments: