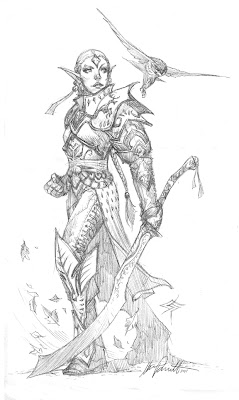 I recently was commissioned to do a drawing of an elf warrior for a birthday present. The giftee and his girlfriend, upon stopping by to pick up the drawing, got the added bonus of not only getting to see my luxurious and swank studio and the blank space on my trashy easel where my latest painting would have been if I was allowed to show it, but also get regaled in tales of my dog's bloody adventures in vanquishing fat groundhogs from our yard. And I learned that lightning is beneficial to gardens. How's about that? 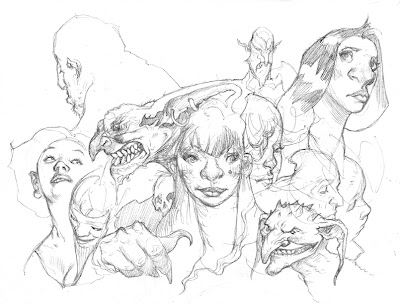 I get rusty quickly and frequently. Sometimes just switching from one job to another is enough for me to lose focus - and suddenly I ain't drawing what I want to draw. At least not very well. My common remedy for this is to keep drawing that fucker over and over and over again until something starts to look right. But sometimes even that isn't opening up the right circuits for me and I need to just numbly move the pencil around and draw ANYTHING to kinda kick-start myself. So, every once in a while (though not nearly as often as I should) I'll sit down and just freely doodle a bunch of crap all in a big amorphous blob - warm up that muscle memory. This is an example of one such page.

I apologize for the lack of posts here in August - been a busy month. But I should get in another one or two new drawings before August closes out.
Posted by Steve Prescott at 10:57 PM 2 comments: